トップ > Unity > 【Unity Tutorial 】How to make a shooter game

In this article, I'd like to introduce how to use Unity by making a simple shooter game. This article consists of 3 part.

We are making the shooter game and scripts according to the book "Unity's textbook" written by me, so please refer to this book as well. 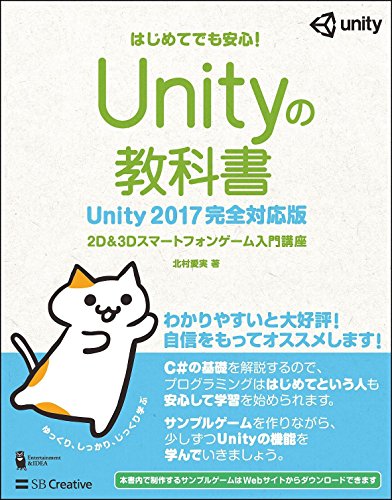 Overview of this shooting game

The game we are going to make will look like this. 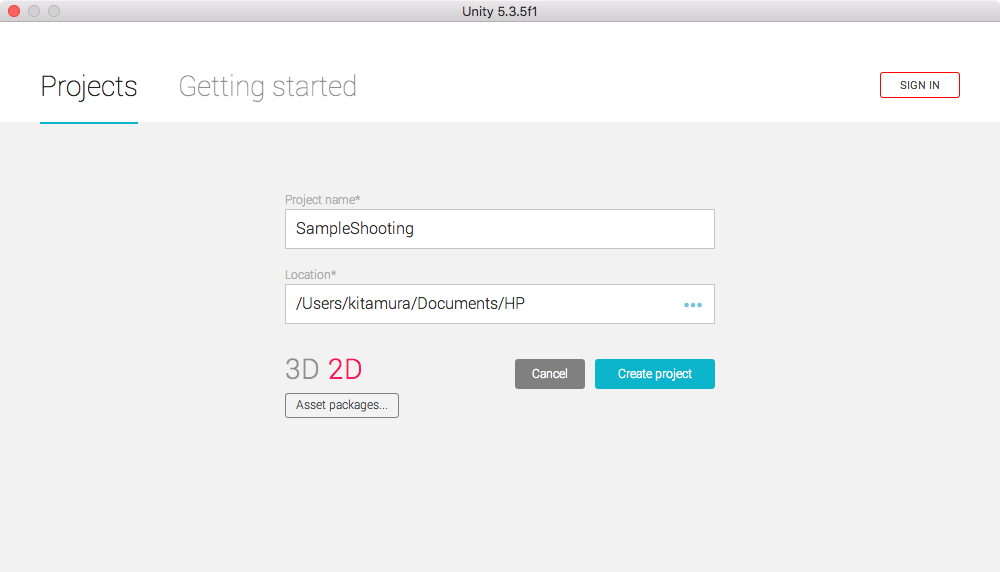 Next, select the screen aspect. Our game use a portrait screen layout, so click the Game tab and select the aspect ratio. Unity does not have a vertical aspect ratio , so click on the bottom "+ button" and select "Aspect Ratio" for a Type field and input "9: 16" for Width & Height field. 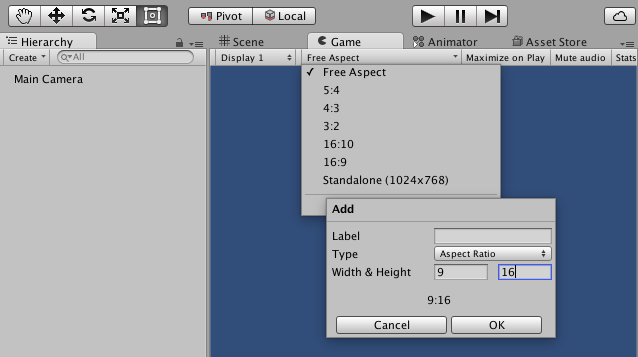 Drag and drop the assets used in this game to Unity's project view. Assets for our game can be downloaded from the following URL.

Let's add a rocket image to a scene view

At first, we gonna add rocket image(In Unity2D, image is called "sprite") on your scene view. Drag and drop the rocket sprite from the project window into the scene view. 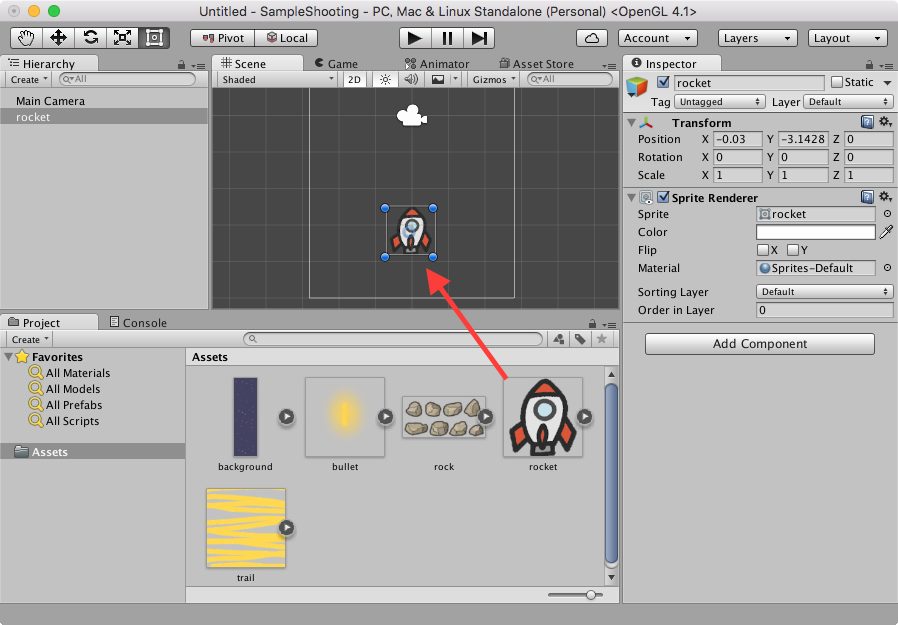 The rocket will be displayed on the screen.

You can change the position of the rocket from the inspector. When you select "rocket" in the hierarchy view, the rocket details are displayed in the inspector on the right side of the Unity editor.

Next, Create a C# script to move the rocket with the left/right key. In Unity, you can use programming languages ​​such as C# or Javascript. Here we gonna develop our game using C#.

Right click on a project window and select "Create" → "C# Script", and
then change the file name to "RocketController.cs". 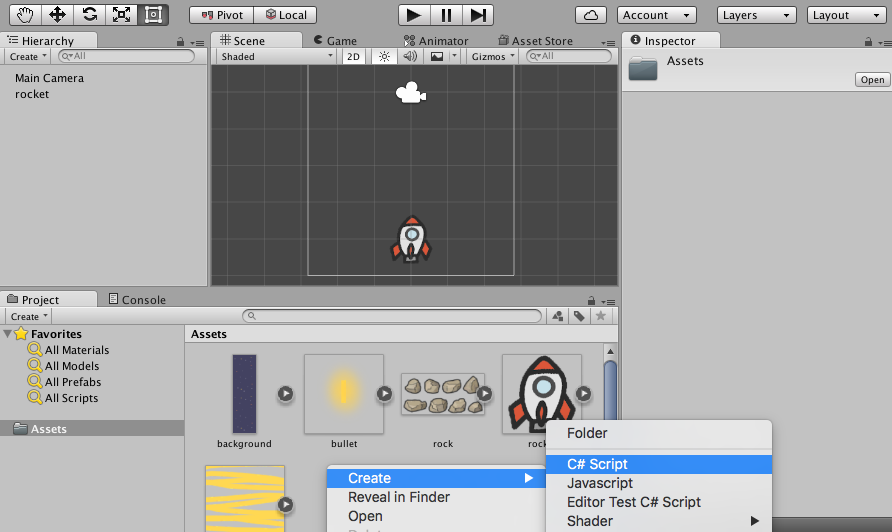 Double click on RocketController.cs and open the code editor(Mono develop or Visual Studio) and enter the following script.

This script checks whether the keys(LertArrow and RightArrow) are pressed by using the Input.GetKey() method. When these keys are pressed, use the Translate() method to move the rocket in the direction of the arrow key. Translate () is a method that moves the object in the direction and distance of the argument. Note that the argument is not the absolute coordinate of the destination.

Next, we attach the RocketController script to the rocket object. In order to move an object as written in a script, you need to attach a script to the object.

Drag and drop "RocketController.cs" from the project view to "rocket" object in hierarchy view. 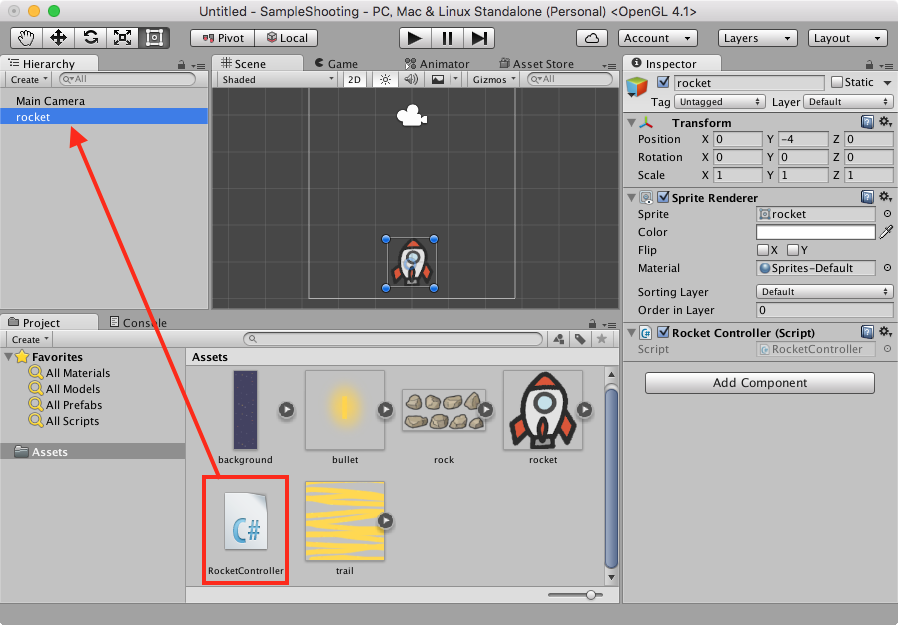 Press the play button at the top of the Unity editor. You can move the rocket with the right/left key.

The flow of firing a bullet from a rocket is as follows.

At first, add the bullet's sprite on the scene view. Drag and drop "bullet" object from the project window to the scene view. Since the position of the bullet is specified by the script, you can place your bullet anywhere. 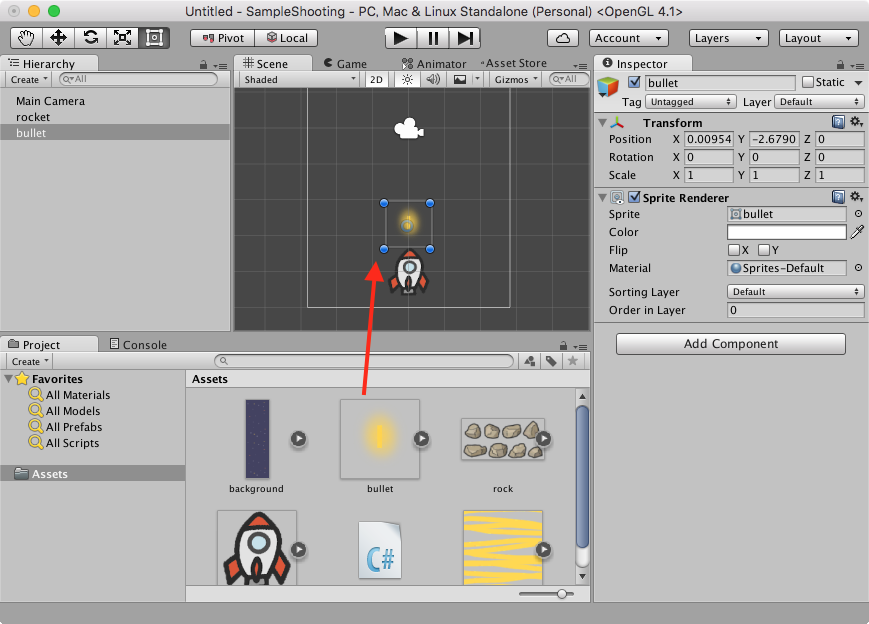 After the bullet is added, you should make a script to move the bullet upwards. Right click in the project window and create a script with "Create" → "C# Script" and change the file name to "BulletController.cs". 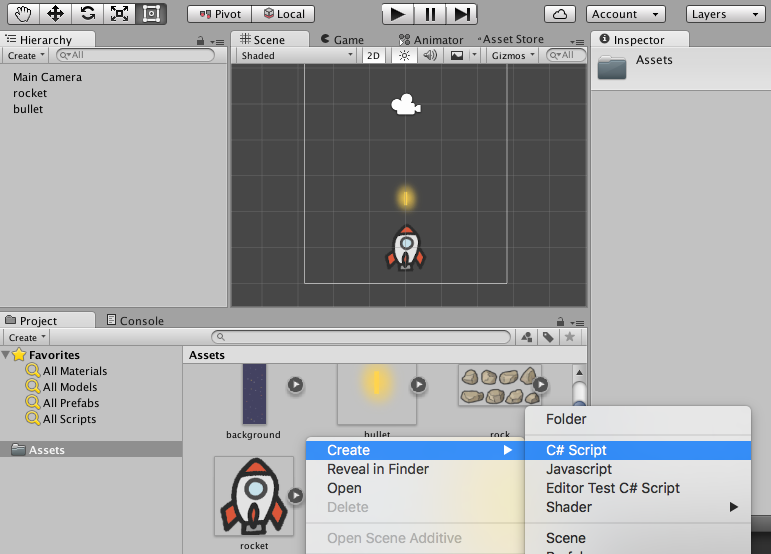 Open the "BulletController.cs" and write the following script.

We use the Translate() to move bullets upward (y-axis direction) by 0.2f every frame. This is the very similar way we used to move the rocket.

Even if bullets are out of the screen, bullets will continue to keep moving. Since this is a waste of CPU power, let's destroy the bullets when bullets go beyond the top of the screen (y = 5).

Save the script and attach it to the bullet just as you did with the rocketController.cs. Drag and drop "BulletController.cs" in the project window to the "bullet" in the hierarchy view. 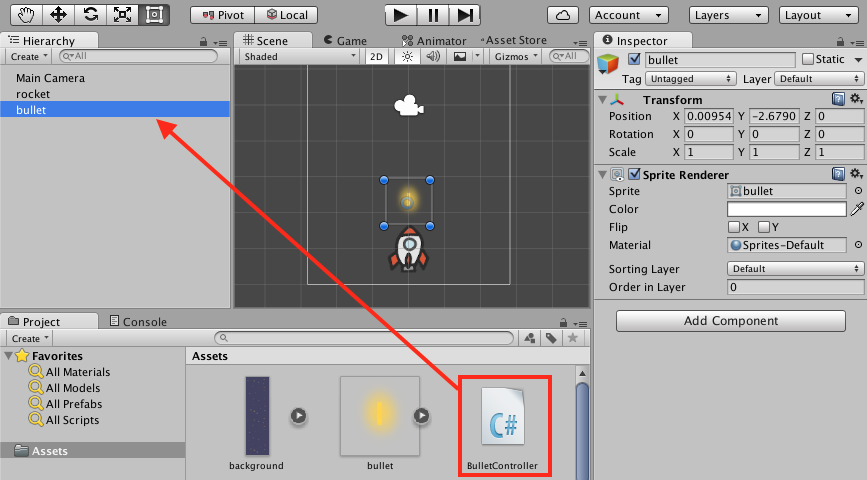 You attach the script, press the play button and run the game. The bullet moves upwards.

Next, we will make a Prefab of the bullet. Prefab is like a blueprint, and you can easily duplicate the same object using Prefab.

Select "bullet" in the hierarchy view to create bullet Prefab and drag & drop it to the project window. Then change the created file name to "bulletPrefab". 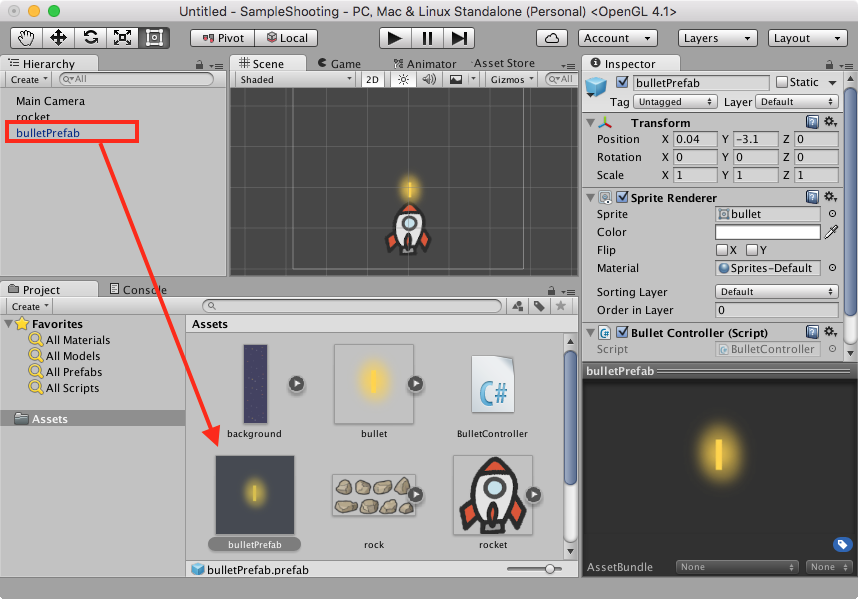 After you create the bullet Prefab, the bullet on the scene view are not necessary. This is because you can create bullets from the Prefab anytime if you have blueprint. So right click in a hierarchy window and select "Delete".

Create an instance from Prefab

Next, create a script to generate an instance (duplicate) of bullet from bullet Prefab when the space key is pressed.

Open the "RocketController.cs" and modify the script as follows.

Since transform.position is specified as the second argument, bullets are generated at the position of the rocket. 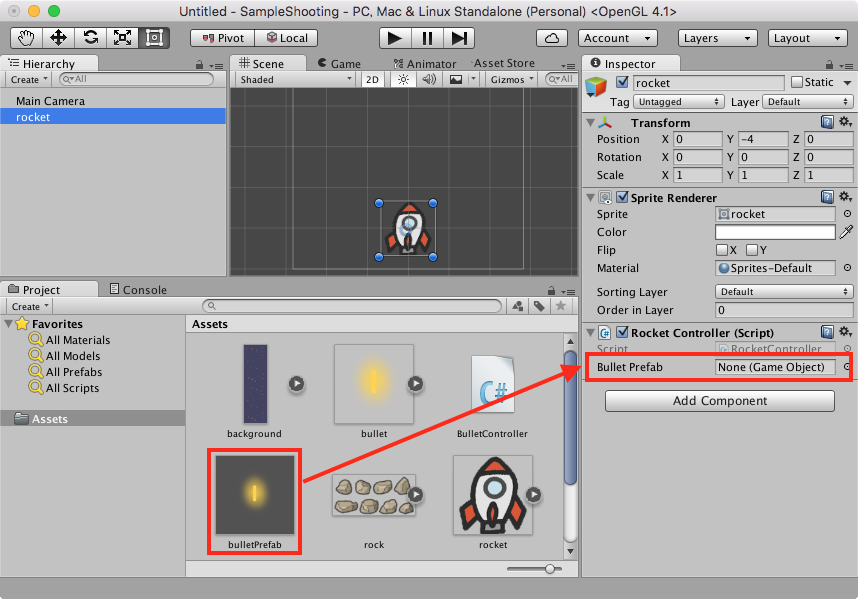 Then bullets are fired each time when you press the space key.

The project file created this time can be downloaded following URL.